I am an experienced music leader for congregational worship, familiar with organ and piano/worship band-led styles of worship in the Anglican and non-conformist traditions.

I have also worked as a cantor in responsorial styles of worship from catholic traditions, and am familiar with music of the Iona Community, Taize, and modern Roman Catholic composers.

I currently deputise regularly for churches in the Stepney diocese, including All Saints Poplar, St Paul Old Ford, and St Mary Islington. If you need a deputy musician for Sunday worship, please contact me. 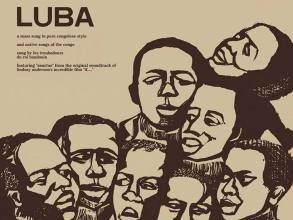 Sixty years ago this year the Misa Luba was first performed in Europe and around the world, by Les Musiciens du Roi Baudouin of Congo, under the direction of their composer-priest Fr Guido Haazen. It is a remarkable piece, setting words of the Roman Catholic Latin Mass (this was before the Second Vatican Council) to folk song melodies of the Luba people.

The work was recorded, and is still available. It has become the subject of a PhD by Marc Ashley Foster (2005) and is also superb example of 'inculturation' - the adoption and adaptation of Christian faith and practice by people whose culture is different to that of those who converted them.

For Soul in the City 2017, the St Mary's Ensemble performed the Agnus Dei of Misa Luba as part of a concert celebrating diversity and inclusiveness. It was a fitting climax to the concert, and you can listen to the performance here. 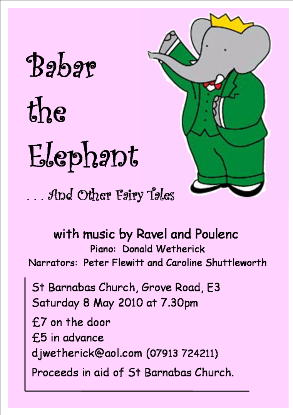 The 'Cinq pieces enfantines' that make up Ravel's 'Mother Goose Suite' illustrate moments from fairy tale narratives. Apart from the last (The Fairy Garden), each is subtitled with a line or two from the text of a story. Three of these are well known stories: Sleeping Beauty, Tom Thumb,and Beauty and the Beast (all from Perrault). The third, 'Pagodes et Pagodines' is based on a less familiar tale, 'The Green Serpent', by Mme d'Anglebert.

Despite their narrative origins, performances of Ravel's suite have not before been combined with narrations of the tales themselves. For a concert pairing with Poulenc's (narrated) Babar the Elephant, I wrote a narration for the Ravel pieces (peformed in a piano solo version by Jaques Charlot) which uses abridged versions of the stories to introduce and set off the music, ending with the narrator walking off to the magical music of the Fairy Garden.